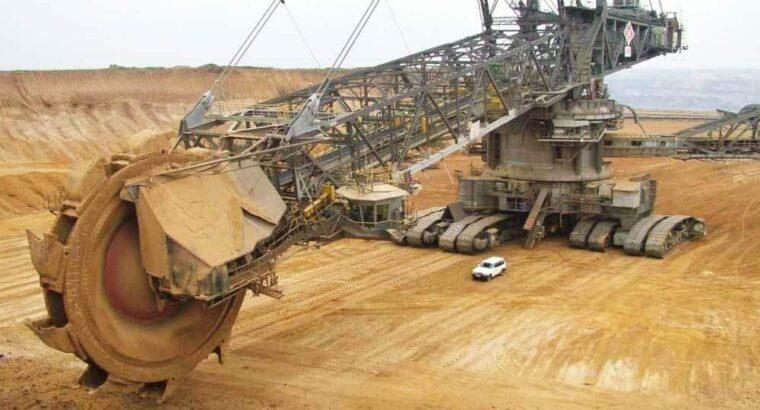 THE BIGGEST EXCAVATORS IN THE WORLD

It is easy to imagine the size of a quarry. Many, many square kilometres that are dotted with auxiliary machinery. Huge machines, excavators, loaders, dump trucks, capable of carrying hundreds of tons of cargo in their bodies. It is at such quarries that the biggest excavators in the world serve.

Incredible sizes, which possesses these truly fantastic mechanisms, does not stack up in the head. The largest excavators in the world are machines created by the German company Krupp. The Bagger 288 was launched in 1978, and its smaller brother Bagger 293 in 1995.

The Bagger 288 was built for the Rheinbraun mining company. It is hard to imagine, but this monster weighs 13500 tons. The machine is made for the mining industry. It is almost 100 metres high, and 46 metres wide and 240 metres long. Imagine the energy required to move such a machine.

However, the excavator can be driven by an electric motor. The amount of energy required to move this mechanical monster and make it work is 16.5 megawatts.

The giant is moved by crawler tracks. The massive excavator is capable of travelling at 600 mph. The wide crawlers provide an even load on the surface, keeping the Bagger 288 in a stable position. The tracks are 3.8 metres wide. There are a total of 12 tracks.

The rotary mechanism with which the Bagger 288 digs is capable of extracting 240,000 tonnes of coal per day (approximately 2,500 coal wagons). Eighteen buckets ensure a continuous digging process by means of the roundabout mechanism’s circular movements.

The volume of one such bucket is 6.6 m3 with a bucket rotor diameter of 21.6 metres. The excavation and loading process takes place simultaneously. The rotary system immediately dumps the mined material onto a conveyor belt, which conveys the minerals for loading.

The excavator is operated by a team of four people. Two operators, the person in charge of unloading from the conveyor belt and the shift supervisor.

The estimated cost of developing, building, transporting to the quarry and assembling the excavator was US$100 million. The whole process took over 5 years. With such financial costs, energy costs and other resources spent to maintain and operate this enormous machine, the Bagger 288 excavator was one of the most ambitious mining and quarrying projects ever undertaken.

In 1995, another mining monster was born, the Bagger 293 backhoe, which entered the Guinness Book of Records. Although more modest in size, the Bagger 293 weighs slightly more than its bigger brother, at 14,200 tonnes. At the same time, its length is 15 m less.

In general, the parameters of this giant are similar to the Bagger 288 excavator. The same height, the same 21.3-metre diameter rotary gear, equipped with 18 buckets. The extraction volume per day also varies between 25,000 tonnes. The excavator is operated by a crew of 5 men. Today, this monster is working in a German lignite mine. The Bagger 293 is listed in the Guinness Book of Records as the biggest earth moving vehicle.

Adding to this collection is another member of the excavator family used in the mining industry.The excavator 4250, nicknamed Big Muskie was created in 1969 by Bucyrus Erie to work in a coal mine in Ohio, USA.

The world’s largest walking excavator. The giant took 2 years to build and cost more than USD 25 million. The excavator is 67.8 metres high and 148.6 metres long and 46.2 metres wide respectively. The specifications and potential of this monster are as astonishing as those of its competitors.

Not far behind, the Big Muskie weighed in at 13,000 tonnes. Thus the volume of a bucket considerably surpassed the sizes of the previous representatives and made, you will not believe, 168 m3. To imagine clearly the size of this, so to say, scoop, it is enough to tell that two passenger buses could easily be placed in it.

The voracity of the excavator was commensurate with its size. In order for Big Mask to work, it needed 13,000 volts, the equivalent of the electricity consumed by 25,000 flats. The huge cable was moved behind the excavator by a special vehicle.

The radical difference from the Bagger 288 and Bagger 293 was not only the absence of a rotary excavator mechanism. The 4250 single-bucket excavator is a walking excavator, moved by means of special support shoes. Each of these supports is controlled by two pairs of hydraulic cylinders.

Using the hydraulic clamping shoe mechanism, the Big Mask is lifted off the ground, after which it sits on the ground with the support plates. Due to this technology, these excavators are called walking excavators, resembling a stepping process

A crew of 5 took part in operating the monster-excavator. Today the Big Mask has reached the end of its working life and is being dismantled for parts after 30 years, having produced more than 465 million m3 of rock for mining companies. The Big Mask bucket is now the property of the Ohio State Mining Museum.